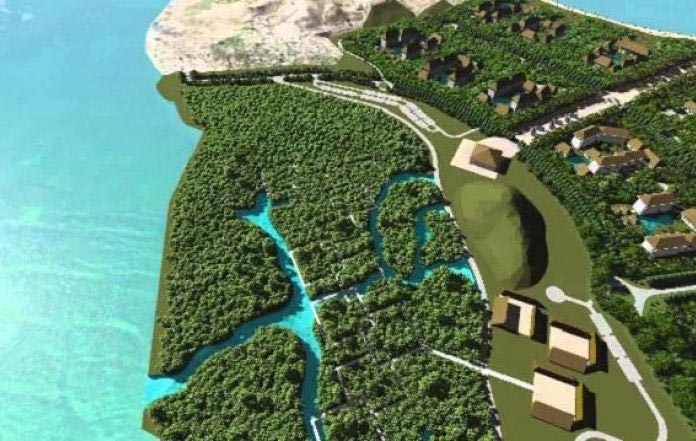 Portion of the area of the Mandalika Resort Mega Development project (now under construction in Kuta, Lombok Indonesia) slated for new international hotels.

This project is developed by state-owned construction company Pembangunan Perumahan (IDX:PTPP) through its subsidiary, PP Properti (IDX:PPRO), in cooperation with EBD Paragon. The resort is built on an area of ​​7.65 hectares. The resort, worth IDR1.3 trillion, is expected to be operate more than 400 rooms by 2020.

The Mandalika area is developed by state-run Indonesia Tourism Development Corporation (ITDC). The construction of Paramount Resort is a testament to investor confidence in the commitment of ITDC in accelerating the development of The Mandalika.

“PTPP’s investment in the Paramount Lombok Resort & Residences project is a realization of the synergy of SOEs in the development of The Mandalika,” Rini said in an official statement received in Jakarta on Wednesday (04/18).

Other international-standards hotels that will be developed in The Mandalika are the 240-room Hotel X2, 342-room Grand Mercure Hotel, as well as the 173-room Aloft by Marriot, among others.

In total, ITDC has secured investment commitment worth IDR13.5 trillion in the framework of The Mandalika’s development. In addition to hotel and resort investments, ITDC has also secured a committment with France-based SOE Vinci Grand Project to develop the Mandalika Street Race Circuit Cluster. The 120-hectare cluster project will be a part of the international-class accommodations at The Mandalika.

While in terms of employment, it is estimated in the next five years, Mandalika will be able to absorb nearly 5,000 workers, gradually. By 2030, the projected development of The Mandalika can employ up to 56,000 workers.

“Congratulations to the ITDC, I appreciate and fully support the positive efforts that have been, and will be done in order to develop Lombok’s tourism and economy,” Rini added.SOEs must also be able to work together in synergy best for the nation, “said Rini.