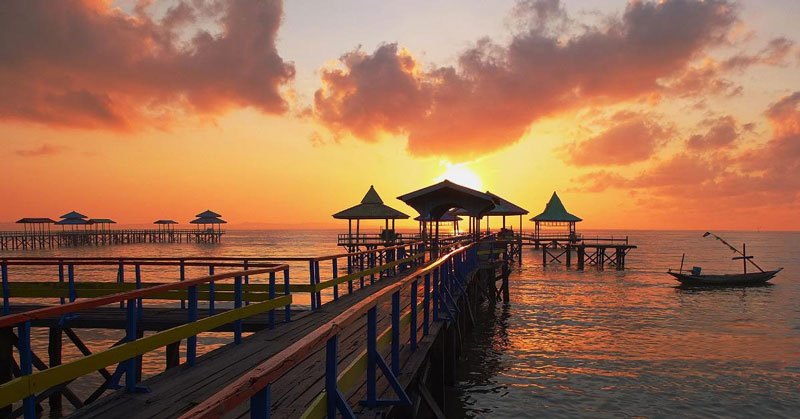 Gorgeous bright orange sunset photo taken from a romantic pier in an Indonesia waterfront location. The image showcases Indonesia as a destination for Halal Tourism.

Indonesia will reveal Lombok as one of its top four Halal Tourism Destinations – paired with travelers’ countries of origins, at ATM Dubai’s Global Halal Tourism Summit, on April 24.

Bali is by far Indonesia’s most popular destination; however, it is not its most Halal-friendly one. With that in mind, Indonesia designated four top Halal destinations that are alternatives to Bali. At ATM Dubai’s Global Halal Tourism Summit, Mr. Riyanto Sofyan, Chairman of Halal Tourism Acceleration and Development Team, Indonesian Ministry of Tourism, will share the pairing of award winning Halal destinations with countries of origin as well as each group of traveler’s specific preferences.

For example, Muslim travelers from the UAE, Saudi Arabia, Kuwait and Qatar prefer destinations with natural beauty, and like to stay at beach or mountain resorts. They enjoy spas as well as shopping, prefer four and five-star accommodation, and enjoy having Middle Eastern cuisine options available. GCC travelers tend to travel as large families, and usually book with travel agencies. Based on their preferences, West Sumatera, Jakarta, and Lombok are the top destinations that match the requirements of GCC travelers.

The West Sumatera region is known for its natural beauty as well as its cuisine; with its rendang dish being nominated as one of the best foods in the world in a CNN poll last year. The capital Jakarta is best known for shopping and entertainment; its Thousand Islands is famous for its luxury resorts, snorkeling and water sports. Lombok, dubbed the land of a thousand mosques, is home to the second highest volcano in Indonesia. It won the World’s Best Halal Honeymoon Destination and World’s Best Halal Tourism Destination in 2015.

At the summit, Mr. Sofyan will additionally share destination pairing for Muslim travelers from Europe, including Germany, the UK, France, Russia and Turkey; as well as destination pairing for travelers from Asia and Southeast Asia including Malaysia, Singapore, China, Japan, Korea and India. For example, Aceh, which is well known for water sports, including snorkeling and diving, is popular with adventure seeking Muslim travelers from the West as well as from Asia Pacific. Its Islamic heritage and culture – it is famous for its Saman Dance which is on UNESCO’s list of Intangible Cultural Heritage – make it suitable for Muslim travelers who enjoy Islamic heritage and cultural aspects.

Mr. Sofyan will also discuss Indonesia’s Halal travel marketing strategy. “Our marketing and promotional mix is focused on what the destination has to offer in terms of general tourism attractions, such as, sceneries, sight-seeing, culinary adventures, shopping tourism, and other attractions, while promoting Indonesia as a family-friendly destination with Halal Certified Food, Prayer Spaces, and other Muslim requirements,” says Mr. Riyanto Sofyan.