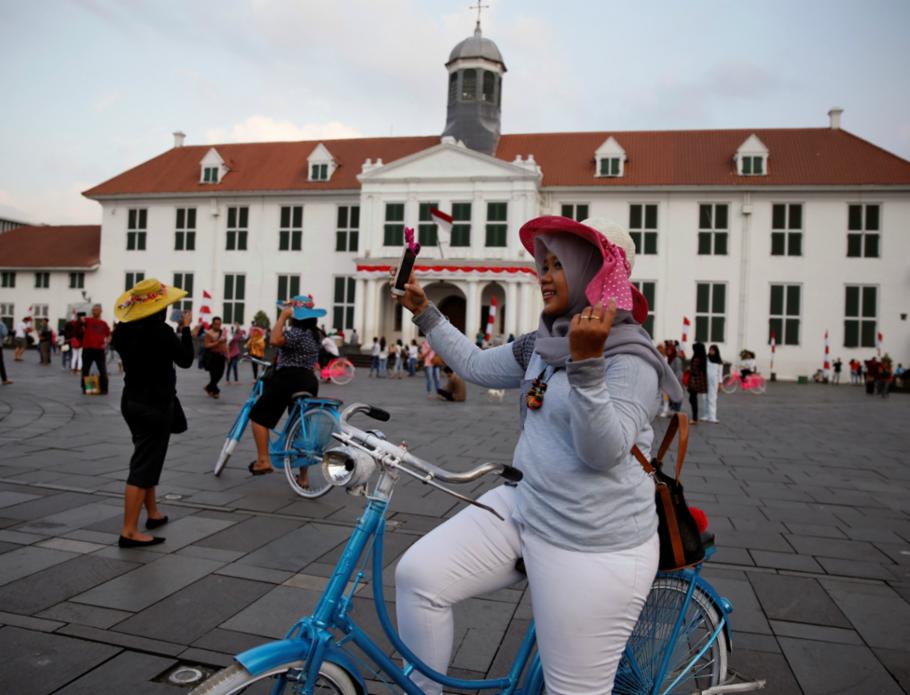 A tourist takes a selfie in front of Fatahillah Museum in Jakarta’s Old Town, a popular tourist spot in Jakarta, Indonesia

Indonesia’s Team for Halal Tourism Accelerated Development, a taskforce under the ministry of tourism, will launch the Indonesia Muslim Travel Index (IMTI) in September to track and benchmark the nation’s progress in the development of its halal tourism industry, said Riyanto Sofyan, its chairman.

IMTI is a range of key performance indicators (KPIs) in line with halal industry benchmark the Mastercard-CrescentRating Global Muslim Travel Index (GMTI) that since 2011 has measured the level of Muslim-friendly travel in 130 countries. Indonesia climbed one rank to joint second place with the United Arab Emirates on the GMTI 2018, behind Malaysia that retains pole position as the Muslim-friendliest destination.

Indonesia’s index will use GMTI’s four overarching criteria—access, communication, environment, and service—and include more detailed metrics to assess the country’s halal tourism development, according to Sofyan.

The exercise will help the Indonesian government identify areas that require improvement.

“In line with this, there will be capacity building for the tourism workforce, industry players and communities, as well as increasing halal certification, or even assistance from the halal auditor the Majelis Ulama Indonesia (MUI),” said Sofyan.

The work will also extend to improving infrastructure. Sofyan gave the example of the Islamic Center Mosque development in Lombok, which received 1.5 billion Indonesian rupiah ($109,000) in funding from the ministry of tourism to improve its lighting system. The same support could be given to any regional government that shows a commitment to develop its region as a halal destination.

Sofyan pointed out that Indonesia has an extensive halal tourism infrastructure but the level of halal certification is very low.

“The problem is, we usually forget to certify our hotels and other premises, compared to competitors such as Malaysia and even non-Islamic countries like Japan and Thailand that are more aggressive in certifying their halal tourism infrastructure,” said Sofyan.

At the end of 2017, Muslim visitor arrivals in Indonesia reached 2.7 million, up 22.8 percent compared to the previous year. This is a small number compared to the 131 million Muslims who travelled worldwide in 2017, according to the GMTI.

Indonesia’s government is aiming for 3.8 million Muslim visitors this year. It hopes that big events such as the annual meeting of the International Monetary Fund and World Bank in Bali in October and the Asian Games in Jakarta and Palembang in August will boost Muslim tourist arrivals.