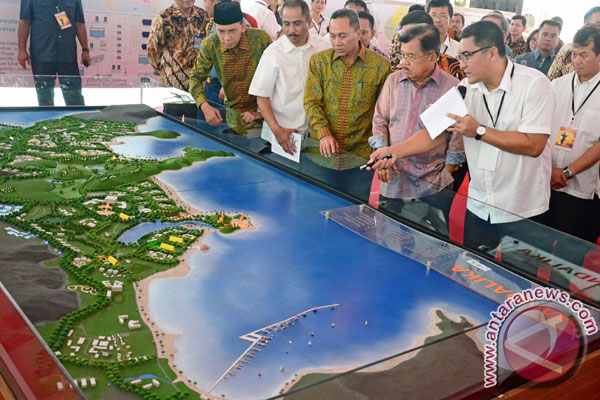 A model of the new Mandalika Resort mega-development is reviewed and discussed by Vice President M. Jusuf Kalla (third right), who received an explanation by Tourism Development Director of PT Indonesia (Persero) or Indonesia Tourism Development Corporation (ITDC), Abdulbar M. Mansoer (second right), about plans for tourism development at Mandalika during the inauguration of the Special Economic Zone (SEZ) Mandalika in Kuta, Central Lombok. President Joko Widowo (“Jokowi”) has publicly pledged the full support of his office to the rapid development and completion of the Mandalika Resort project.

Accelerated completion of the Mandalika Resort Development in Kuta, Lombok will help speed economic growth in the province of West Nusa Tenggara.

After recording sluggish progress since its opening in October 2011, the development of the Mandalika resort which has recently attained the status of a “Special Economic Zone” (SEZ) in Central Lombok, West Nusa Tenggara, will be expedited.

Reviewing the development of the Mandalika Tourism SEZ in Central Lombok over the weekend, Vice President M. Jusuf Kalla stated that the local communities should be trained in hospitality skills, such as service with a smile and also about maintaining cleanliness. Kalla noted that tourist attractions in various regions in the country have drawn several foreign tourists, but innovation is the key to attracting more investment.

“Tourism is the easiest means to attract investment as it does not require huge capital,” Kalla said, adding that the main capital given freely by God is the beautiful natural landscape and the hospitable behavior of the residents around the tourism site. Therefore, the vice president noted that the best approach to develop tourism is to bring about innovation as he believes there are several places in the country that are considered usual and mediocre but are of immense interest to foreigners.

“Several tourist spots here are discovered by foreigners as the appeal of a place holds different significance to different people. For instance, we take for granted our blue sea and the variety of coral reefs, but for foreign tourists, they are very exciting,” the vice president affirmed.

Four hotels to begin construction in 2016, are Pullman Hotel of the investment fund PT Indonesia Tourism Development Corporation (ITDC), which is a state-owned enterprise (SOEs) in the field of tourism. Other hotels are Intercontinental Hotel, Club Med Hotel and Lees Hotel, and the construction of the entire capacity of the 850-room hotels was targeted to be completed within a period of two and a half years.

“Everything has been completed, and there no reason not to accelerate the construction of these four hotels,” the vice president noted.

After hearing the exposure of investors, the vice president then listened to the explanation of President Director of PT ITDC, Abdulbar M Mansoer, related to the development of Mandalika SEZ within the next 10 years. In addition to building hotels, ITDC will also build the basic infrastructure needed by the hotels to support their operation, such as the need for clean water that will utilize seawater through the refining process. This work is done by establishing a partnership with EBD Bauer, one of the American companies engaged in the purification of seawater into fresh water.

Other infrastructure that is in the process of being set up is a solar power plant (SPP) and gas power plants for hotels in Mandalika SEZ, which will not use electrical energy from the State Electricity Company (PLN).

“Thus, some 20 star-rated hotels will be built in the Mandalika Special Economic Zone within 20 years. For the first stage, we will build four five-star hotels, and we have prepared the basic infrastructure,” said Abdulbar.

ITDC is also constructing the Tourism College (STP), which will create the human resources needed by the hotels. Capital Investment Coordinating Board (BKPM) Chief Franky Sibarani has stated that, when completed, the special economic zone of Mandalika resort will be able to employ more than 58,000 workers.

“During the construction period, the number of workers is predicted to increase by two to three fold and reduce the flow of Indonesian workers abroad,” Franky said some time ago. In his visit to Mandalika resort in Central Lombok last May, the BKPM chief noted that the absorption of labor in large numbers in West Nusa Tenggara was important because the province was the largest supplier of Indonesian workers abroad.

“I visit Mandalika resort to make sure that the realization of the investment process in the development of the special economic zone goes without a hitch, so as to encourage employment and economic growth in the province,” Franky remarked. Further, he noted that BKPM was ready to help promote the development of Mandalika resort abroad in international forums, such as Milan World Expo, and other promotional events in Japan and China.

According to Franky, the Mandalika Special Economic Zone is ready to welcome investment from investors, because the master plan for construction has been completed and the land acquisition problem is also almost finished.