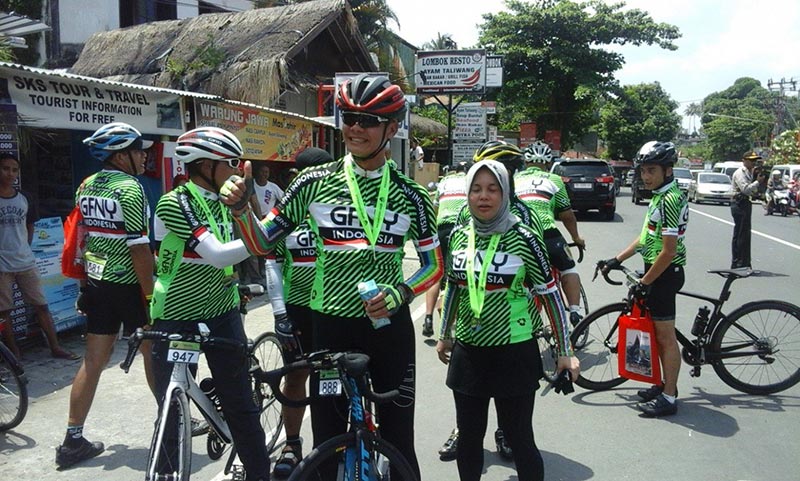 After the successful 2016 GNFY Indonesia bicycle marathon on Sunday, Lombok’s potential as an international sports tourism destination has been elevated said NTB tourism and cultural agency head Lalu Mohammad Faozal. 600 cyclists, including 200 foreigners and 400 Indonesians from 31 countries participated in the event.

Lombok in West Nusa Tenggara (NTB) is considered to have potential as an international sports tourism destination following the successful Grand Fondo New York (GNFY) Indonesia 2016 bicycle marathon on Sunday. “In addition to being a home to many tourist attractions, Lombok and NTB in general have very developed infrastructure, particularly for bicycle races,” NTB tourism and cultural agency head Lalu Mohammad Faozal told The Jakarta Post during the race in Senggigi, West Lombok, on Sunday. Around 600 cyclists from 31 countries participated in the event, comprising around 200 foreigners and 400 Indonesians.

From the starting point at the Santosa Senggigi Hotel, the cyclists passed along the 80- and 180-kilometer routes, which included some tourist attractions in West Lombok, Central Lombok and North Lombok, before heading back to the hotel, also the location of the race’s finish line. (Read also: Bintan set to become sports tourism destination)Central Java Governor Ganjar Pranowo celebrates his success after finishing the race on Oct. 2 in West Lombok.(JP/Panca Nugraha)Central Java Governor Ganjar Pranowo and NTB Governor M. Zainul Majdi also joined the race. Ganjar, who participated in the 180-kilometer marathon, even successfully finished among the top five with 4.5 hours.

“The track is spectacular. The road is smooth and there are many interesting attractions to see; it has very good tourism potential for NTB,” said Ganjar.The event serves as the world’s first cycle marathon of the GFNY series in Indonesia. Other hosts for this year’s GFNY are Mont Ventoux in France, Mexico City in Mexico, Germany, Italy, Argentina, Cozumel in Mexico, Uruguay and Colombia. The peak of the event will be held in New York, the US, on May 21, 2017.