According to official data issued by the Indonesian Central Bureau of Statistics, international tourist arrivals to Indonesia from January through October 2016 reached 9,413,814, being a growth of 9.54% year on year.

But since total yearly arrivals can be confirmed only in January next year, Minister Arief Yahya estimated that based on monitoring actual trends, arrivals in November can be estimated to reach 1.3 million and in December 1.5 million arrivals. This means that Indonesia can confidently confirm to have reached the target of 12 million in 2016, being a phenomenal growth of  20% in one year, up  from 10.4 million in 2015.

“These significant achievements have strengthened Indonesia’s resolve to aim even higher by raising our goals and targets  for 2017 to 15 million international arrivals – or a growth rate of 25% -, and on to 20 million arrivals in 2019”, said Minister Arief Yahya.

In next year’s 2017 plan, the government has stipulated that tourism must increase international arrivals to 15 million, increasing 25% over this year’s achievements, providing a 13% share to national GDP, and creating 12 million jobs. These achievements should push Indonesia’s competitive index , from the present rank at 50, up to rank no. 40 in the WEF World Competitive Tourism Index. And this amidst global tourism growth of 4.4% and ASEAN tourism growth of 5.1%.

“Remember, that exceptional results can only be achieved through extraordinary actions’’ reminded Minister Yahya to all.  And, therefore, this requires all of us involved to follow what he called the 3S in Tourism corporate culture, being: Solid cooperation and coordination, speedy actions at all levels, and a spread throughout the archipelago. We must all work in unison and with speed so that tourism’s impact on Lombok investment will  grow commensurately and equally significant”.

To achieve these goals, the Ministry  will place emphasis on three key priority plans, starting from the first quarter next year, these are: Go Digital, Air Connectivity, and the construction of 20,000 Homestays in Tourism Villages across the archipelago.

These actions will take into consideration  capacities of Indonesia’s three main gateways of Bali, Jakarta and the Riau Islands, as well as that of the top 10 priority destinations that have been earmarked for accelerated development, which are named the New Bali destinations. These include: Lake Toba

in North Sumatra,  Bangka-Belitung in the southern part of Sumatra,  Central Java and Yogyakarta that centralize on Borobudur temple the Thousand Islands facing Jakarta, the Bromo-Tengger-Semeru  mountains area in East Java, the  beach area in Banten, the Mandalika Beach area in Lombok Labuan Bajo, springboard to the Komodo islands in Flores, Wakatobi in Southeast Sulawesi, and Morotai in North Maluku.

In the Go Digital tourism plan, this has already been started in September 2016 with the creation of the ITX (Indonesia Tourism Exchange) digital market place platform offered to all ecotourism businesses and other activities where buyers meet sellers. We expect  ITX to be fully operational in the first quarter of 2017 when all tourism businesses will have gone digital, said the Minister.

And, if two years ago we concentrated on Branding the Indonesia Destination, last year  we focused on Advertising, this third year we will shift to emphasizing Sales.

A Digital “War Room” has already been set up in the Ministry to enable us to follow and receive inputs on all developments and feedback from throughout the country on tourism traffic to shortfalls in services. .

As regards connectivity, to achieve the expected goals, air connectivity from major world markets and on to main and secondary destinations is of utmost importance. This is because over 75% of tourists to Indonesia arrive by air, although breakthrough regulations have also been made to facilitate the entry of yachts and the lifting of cabotage for cruise ships.  Today, border destinations are also upgraded and events held on the borders with Papua New Guinea, Timor Leste and with Singapore and Malaysia,  to attract more border crossing tourists.

Air capacity-wise Indonesia aims to increase air seat capacity to 4 million. Although this is the purview of the Ministry of Transportation, nonetheless, the Tourism Ministry is already collaborating closely with the Transport Ministry, domestic and international Airlines, Airnavigation and Airport Authorities, upgrading and streamlining facilities for  the  fast and convenient arrival and departure of passengers.

Not only are more airlines urged to fly to Indonesia, – Indonesia’s LCC carriers are already flying direct from China to Manado, Makassar and Bintan, with Australian Jetstar to add flights to , and Garuda Indonesia flying Mumbai-Jakarta – yet more airports are now operating 24 hours daily to allow international flights to land at any time of the day or night. 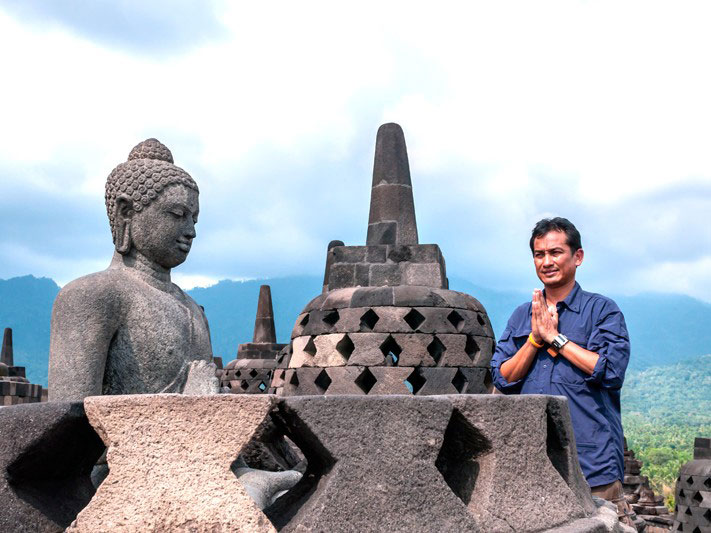 Indonesia tourist praying in morning at Borobudur Buddhist Temple in Yogyakarta Java, Indonesia. Candi Borobudur is located in Magelang Regency in Java, Indonesia and is now well known as a tourist hotspot rather than a religious place of practice. It is mainly known for its giant stupas on the top levels of the temple and thousands of Buddha statues.

Furthermore, to receive the expected surge of tourists not only in already well known destinations of Jakarta, Bali and Batam, but since tourists can now fly directly to their choice destinations, the government plans to build Homestays to make available sufficient accommodation facilities almost instantly.  In the first quarter of 2017 over 1,000 homestays will  be built in the country’s top 10 new tourist destinations, said Arief Yahya.

These are around Lake Toba (in North Sumatra); at Tanjung Kelayang Beach (Bangka Belitung); Tanjung Lesung Beach (Banten); Kepulauan Seribu – The Thousand Islands (Jakarta); by the magnificent Borobudur temple in (Central Java), Mt. Bromo Tengger Semeru mountains (in East Java); at Mandalika Beach (Lombok, West Nusatenggara); Labuan Bajo (Flores– jumping off point to the Komodo islands in the East Nusatenggara province); on Wakatobi islands famed as the underwater paradise (in Southeast Sulawesi); and on Morotai island of World War II fame (in Maluku). 100 homestays will be built at each destination. These houses have been designed such that they will blend beautifully with each of the surrounding landscapes utilizing local architecture.

With this strategy in place that are immediately implemented, Indonesia is confident that the target in the huge surge of tourist arrivals to 15 million next year can be met.